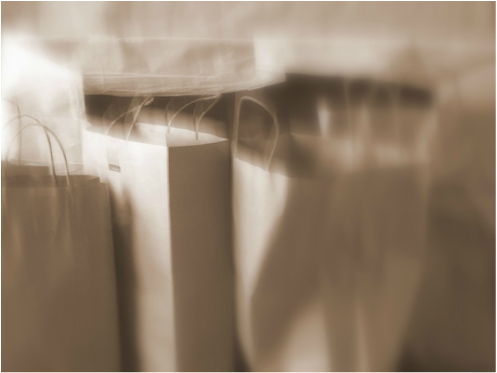 
​Mary Donnelly, in making the invisible visible,  works with absence/presence in an entirely other mode, one which is paradoxically more material in employing the traditional mediums of painting and photography – photography, in this context, alluding to Barthes’ notion that contact is maintained with original referent, the something which exists or once existed in the real world.  For Barthes this connection is recorded in the physical changes to the silver gelatine emulsion of black and white prints [even digital prints in black and white could be said to fake the material contact of this chemical medium ].  However while her mediums insist on a certain engagement with material reality, Donnelly’s choice of subject – empty shopping bags – conjures notions of absence.

There is therefore a tension between something and nothing, between a seemingly inconsequential content plant of what is literally to be thrown away, and a technique which wants to add something more, to make a mark of material presence.  If photography, according to Barthes, always presupposes the replication of a real somewhere, an original something, Donnelly toys with the value of the original things, offering only the meagre presence of their supposed material remainders – the packaging of empty shopping bags and paper sacs, beautifully rendered in the full plentitude of expanded emptiness.  Their contents gone, what remains is the plumped out forms of nothing, multiplied over and over again.

Her ‘nothings’ pile up as the reminder of so much waste, or so much expenditure; the products vanished, her expanded forms testify to departed contents.  Even so, painterly layers of transparency, representative of plastic bags, are carefully built up to give the illusion of a presence only just maintaining a fragile visibility, hence her title making the invisible visible.  Donnelly’s bags fill out their shape.  None lie desolate, flattened and abject, mourning what has gone as an empty signifier waiting to be filled.  Rather, Donnelly’s upright bags prop each other up as a series of shells retaining the traces of a fullness of presence.

As such, her bags trade with the full plentitude of consumer culture – even a sense of well being, expanding horizontally as signs of purchasing power and recent spending, without, however, giving in, to the brashness of advertising and marketing particulars.  Unlike Warhol, or pop artists working with the vernacular of recently arrived consumerism, in the 1960s, the arrival of the supermarket and a rapidly expanding advertising culture, Donnelly’s references are resolutely painterly, recalling the work of Luc Tuymans and Gerhart Richter.

Like Richter she both photographs and paints, painting copies of photos and layering back some of the substance lost to filmic capture;  and, like both Richter and Tuymans, she paints in a style that gives presence to traces, in her case to the ghostly forms of her transparent plastic bags.  Tuymans, of course, has been tagged a deconstructionist, indicating the appearance of objects as the barest painterly trace, and Donnelly’s technique of building up semi-transparent layers easily resembles acts of erasure and the merest presencing of the visible. Indeed, in several of her works, Donnelly’s representation of semi-transparent form seems to undecidably both build up and deconstruct.

'Can a moment of time exist on a two-dimensional surface'

Donnelly’s work attempts to show a space that engages the viewer with a more psychological edge or narrative with paintings that have a special intimacy, where light and colour play predominant, almost exclusive roles.  Every object assumes particular meaning in the context of her personal experience of life, comprising tactile memories, aesthetic tastes, and the accumulation of memories of presences, gestures, words and sounds.  But this does not mean that Donnelly aims for the restitution of the object in and of itself, as an archaeological relic of her own history, and thus seeks to make it the exclusive subject of the tale and of a practice of painting that is simply the yardstick and reaffirmation of rediscovered time against the nostalgia for lost time.

In 2006 full time study for a Master of Fine Art commenced with the investigation into the aspect as to whether the element of time could be represented on a two-dimensional surface.  Within the body of work, Donnelly showed how painting can be a language for the exploration of time and how the representation of time can be used to explore an aspect of painting.  The works contribute to knowledge about time by developing a visual language through which time can be represented as it is experienced rather than as it is measured.  Donnelly also contributes to knowledge about painting by using painting’s representational capacity in a way that enables paintings to be understood as objects that occupy as well as represent literal space/time.  The paintings represent time as dormant and still, and in doing so, they also represent the temporal nature of the illusory space of painting, contrasting it with the literal time in which each painting is located.  The result is a collection of paintings that seem enigmatic because they reflexively address the elusive subject of the spatial and temporal incommensurability of paintings’ contents and locations, the latter being identified, in this study, primarily in terms of time.  Donnelly has addressed this difficult subject with confidence and originality.